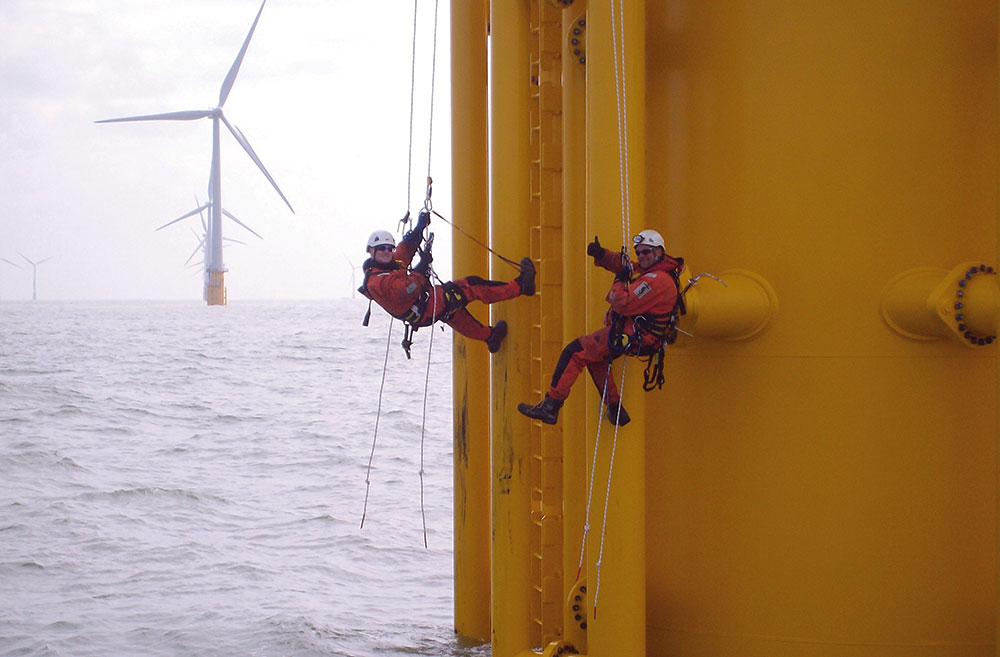 From humble beginnings in a Brightlingsea shipyard, to an international company which is part of the Global Marine Group, the last decade has seen huge growth and change for CWind.

We spoke to Stafford Butcher, who has been working with CWind since 2010, to find out how he feels the company has changed over the years

The company started life as ‘CTruk’ in 2009, designing and building a range of work boats, before a few of the founding team set out to create a new business in 2010, which would deliver a range of services to the offshore renewables and utilities market.

In 2010, ‘CWind’ was born. The company’s first base in Colchester was modest, but with less than 15 office staff, it was ideal for this bourgeoning company. Stafford Butcher remembers the first year of CWind well, he joined as a Technician when CWind was very much in its infancy.

Fast forward almost 10 years, and Stafford is the company’s Head of Fleet, responsible for the daily management of approximately 70,000 crew transfers per year, as well as a wealth of other journeys for the many services our vessels make possible.

At the beginning of Stafford’s CWind career, he was working in Ramsgate painting towers, before moving on to Brightlingsea for an innovation project he would go on to say was his fondest memory of CWind, almost a decade later.

“After working in Ramsgate as a Technician I had the opportunity to set up and manage the Avenger, an amphibious low water rescue craft which enabled us to access shallow water and offshore sand banks to rescue injured workers, as well as seals.

“It was such a new and exciting project, and those who worked on it were known jokingly as the ‘Elite Rescue Force’ – a team I really loved being part of, with a name I certainly could get used to!”

His work with the Avenger did not go unnoticed, and in 2012, Stafford became Operations Manager for CWind’s London Array offshore wind farm project.

“I was responsible for site management on, what was at the time, the world’s largest offshore wind farm. We had a total of 155 generators running simultaneously, with a team of 27 personnel deployed on site every day.”

Over the next year, Stafford would continue to be Operations Manager on the London Array offshore wind farm project, before becoming Operations Manager for topside inspection and cable installation projects including at Walney, West of Duddon Sands and Gwynt y Môr wind farms.

Though CWind was establishing itself in the offshore renewables and utilities market as a provider of Crew Transfer Vessels (CTVs), this really was just the start for the company. CWind provided everything from cable pulling support, CTV charter and foundation works at West of Duddon Sands, to turbine technicians for the onshore assembly, offshore installation, mechanical and electrical completion, retrofit works and more at Gwynt y Môr.

The number of services CWind offered continued to grow, and with it grew the workforce.

“The need for a larger UK location to centralise our operations was evident, so in 2013, we opened our east coast hub in Grimsby, where we could focus on continuing to provide outstanding service for our customers, where they needed it the most.

“It was especially important then because soon after we opened our doors in Grimsby, we won the largest crew transfer contract ever awarded by Siemens, for six vessels at Gwynt y Môr, the wind farm I subsequently became Operations Manager at.”

As demand for CWind’s range of services grew, it became important for the company to train their current workforce in a number of different areas. To nurture talent and create multi-skilled technicians, CWind opened an in-house training school in Lowestoft, Suffolk.

“The training school opening was hugely beneficial for our operations because it meant we could tailor the training our technicians received, to prepare them specifically for the jobs they were going to do. The technicians we employed were more skilled, confident and safe because they had gone through training specific to the responsibilities and conditions they would encounter offshore.”

CWind’s culture has always been one of learning and development, but after the acquisition by Global Marine Group (GMG) in 2017, the company adopted an even greater focus on nurturing talent. A strengthened focus on training opportunities for colleagues was not the only change Stafford saw when CWind became part of GMG.

“The culture at CWind was always really friendly, when we were a smaller company we were like a family and we handled the challenges of trying to grow a small business, together. After the acquisition, the culture remained very friendly, but we also had access to the resources of a much larger, and more well-established company in Global Marine Group.

“Joining GMG meant that we adopted new processes and procedures and ultimately, we became more corporate, with a strong strategy for expansion. Overnight, we gained access to Group assets and the expertise of almost 1,000 colleagues, so we have continued a culture of knowledge-sharing.”

One of the GMG assets, our award-winning engineering and innovation department, has proven particularly beneficial for CWind. The company has been at the forefront of new technologies since its conception, and now, with access to a large team of engineers from diverse backgrounds, the company is constantly developing ideas to improve their service offering, the industry, and our impact on the environment.

For any business in the renewables industry, it’s important to be adaptable and innovative to meet the changing needs of the market. Since 2010, global direct primary energy consumption increased by 12.6%, to a total of 158,839TWh in 2019. As the demand for energy rises, and with it, a growing reliance on renewable resources, it is this flexibility and willingness to break traditions that Stafford views as the key to CWind’s success so far.

“The industry is fast-paced, and we often need to be reactive. At the heart of our success is the fact that we are still offering the same services we have since the start, but over the last decade, we have expanded our capabilities, focused time, training and resources to offer the best service we can for our customers, and ultimately, we seize every opportunity open to us.

After ten years of providing the same core services, and constantly striving to improve with our customers in mind, we have earned our place within the industry. I’m excited to find out what the next ten years has in store for us.”

A decade has gone by since the CWind story began. We still work alongside many familiar faces from the early days who have been instrumental in our success over the years. We really are fortunate to have so many experienced, knowledgeable and determined members in our CWind ‘Family’. So whether you’re a colleague past or present, customer or supporter of CWind, we would like to say ‘thank you’ to you for being part of our journey so far.