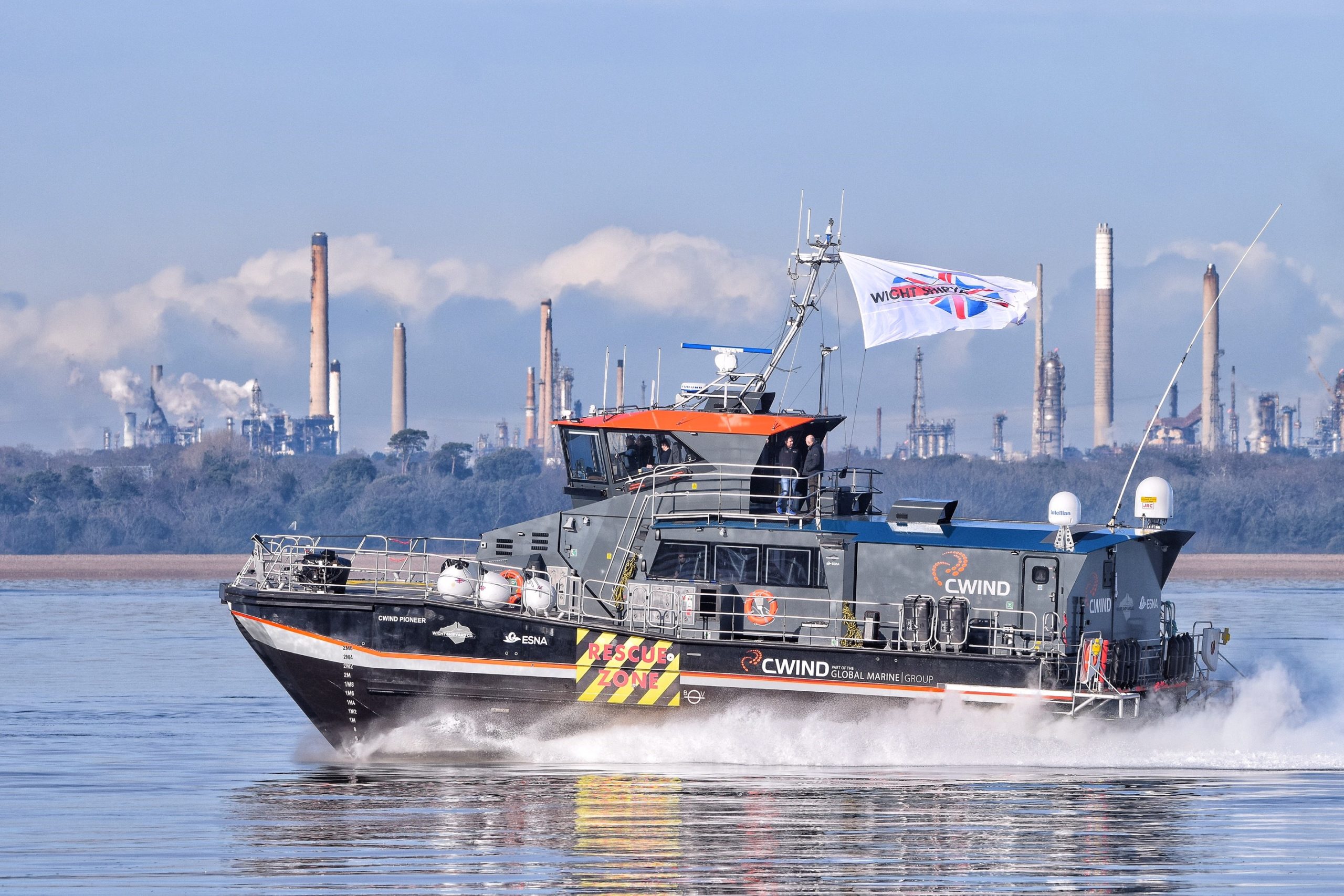 Reduced emissions and fuel consumption, increased speeds and range, and an ability to operate in higher sea states are factors influencing the design of the latest crew transfer vessels (CTVs) for the offshore renewables sector.

Vessels are being designed with hybrid propulsion, electric drives and an ability to operate in more remote locations for longer, as the offshore wind sector installs deepwater fixed and floating turbines.

Challenges in reducing emissions and costs can be overcome through investment in hybrid propulsion and batteries for low, or even zero, carbon operations. If these are not viable, then vessels should have IMO Tier III-compliant engines for minimal NOx and particulate matter emissions.

“Reflecting on what our customers now require of us, we must strive to create vessels which are future-proofed and ready to adapt and evolve to the changing demands of the industry,” said Mr Hurst.

“A vessel which can perform in increased sea states is vital for reducing lost time due to weather days. As projects move further offshore, the investment in individual vessels increases,” he said. Capital investment in CTVs of more than 30 m in length are estimated to be around US$10M.

Earlier generations of CTVs were built to operate in 1.5 m significant wave height, but there are requirements for up to 2 m height. “This is becoming more of a desired advantage for projects further from shore,” said Mr Hurst, as is having accommodation, including sleeping areas on vessels.

There is also an advantage for increasing passenger capacity. “The sweet spot seems to be 24 passengers; however, some of the largest CTVs in the market are able to carry up to 56,” said Mr Hurst.

“Clients are seeking flexibility for a high cargo capacity to ensure they have the ability to utilise their contracted vessel for as much work as possible,” he said.

The hullform of CTVs has also become important for operational and environmental performance, capacity and range. “The impact vessel hullform has on emission reductions is now being realised,” he explained. “It is not enough to simply choose the vessel based on aesthetics alone, we also must evaluate the operational profile requirements of the work it is required to do on site.”

Most hullforms on existing CTVs are monohull or catamaran. There are also trimaran, swath and surface-effect ship (SES) hulls. The benefits of monohulls include ride comfort and fuel saving, while catamarans have larger fore decks and better stability.

CWind is set to introduce the world’s first hybrid CTV with an SES hullform, CWind Pioneer, which has the “ability to be zero-emissions in-field, whilst the technicians are on the turbines, as well as being 20-30% more fuel efficient than a conventional crew transfer vessel,” said Mr Hurst.

“The vessel marks the next generation of CTVs, capable of transferring in increased sea states, reaching speeds exceeding 40 knots and tracking a wealth of data to increase performance, all whilst offering a reduction in emissions,” he explained.

“This vessel offers customers a more cost effective, greener alternative to expensive, fuel-intensive SOVs, which is especially beneficial for windfarms located further from shore,” he said.

CWind Pioneer can operate at speeds exceeding 43.5 knots and can transit and transfer safely in sea states over 1.8 m significant wave height.

At 43.5 knots, CWind Pioneer is 20% more fuel efficient than conventional CTVs running at 24 knots on a mile-for-mile basis, noted Mr Hurst. “For a typical windfarm situated 30 nautical miles from port, this translates to a reduction of over 110 tonnes of CO2 per vessel, per year, by using the hybrid SES,” he said.

Its SES hullform and an air cushion motion-control system minimise motion and accelerations, resulting in a smoother, more comfortable CTV experience for technicians and crew. There is accommodation for 24 passengers on the vessel.

“The overall design and build pays particular attention to technician and crew health, safety and comfort, delivering the workforce in the best possible work-ready condition” said Mr Hurst. He added: “This results in increased operation days offshore for our client’s operations, maintenance and construction activities.”

CWind Pioneer’s hybrid propulsion comes from Danfoss Editron’s hybrid drivetrain. This consists of two inline power take-off and power take-in machines, one DC-DC converter for the vessel’s batteries, grid solutions and shore-charging capabilities. “These components operate via a DC-cabinet and are controlled by a control system that features a small human-machine interface on the vessel’s wheelhouse,” said Mr Hurst. The vessel’s propulsion engine delivers sprint speed and extreme bollard push, from its 1,600-kW installed diesel engines, which can be battery boosted up to 1,800 kW.

Future CTVs and service vessels will also be designed to connect to offshore turbines for charging, according to Maersk Supply Service venture partner Sebastian Toft. This vessel owner has developed a charging system, including a buoy, that will be tested on a UK offshore windfarm in 2022.

This offshore charging buoy could also be used for OSVs when connected to production platforms that are themselves using power from shore.

“They provide safe mooring and clean energy supply, reducing costs for idling vessels offshore. They will support the transition to electric and future fuels.”

When moored, vessels will be able to weathervane by swivelling around the buoy and switch off propulsion. Mr Toft said the first of these is scheduled to be tested on the Race Bank windfarm. If this is successful, other applications could follow.

This comes from experience in upgrading a series of anchor handlers operating offshore Angola, where controllable-pitch, 340-cm propellers, with 356-kW input and 560-kW electric motors were added. Mr Cerdier said these vessels could operate on electric mode for “slow transits and standby operations”. They operate on diesel mode for fast transit and dynamic positioning. “Then on hybrid mode with boost from the motors for maximum bollard pull and response time” he said.

This article was originally published by Riviera.